Cookie preferences
This website uses cookies, which are necessary for the technical operation of the website and are always set. Other cookies, which increase the comfort when using this website, are used for direct advertising or to facilitate interaction with other websites and social networks, are only set with your consent.
Configuration
Technically required
These cookies are necessary for the basic functions of the shop.
"Allow all cookies" cookie
"Decline all cookies" cookie
CSRF token
Cookie preferences
Currency change
Customer recognition
Customer-specific caching
Individual prices
Language detector
PayPal payments
Selected shop
Session
Comfort functions
These cookies are used to make the shopping experience even more appealing, for example for the recognition of the visitor.
Note
Statistics & Tracking
Affiliate program
Google Analytics
Track device being used
Categories
Information 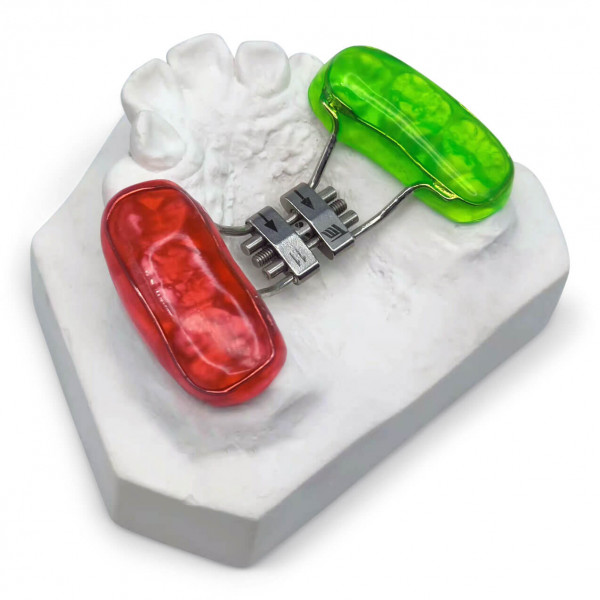 RPE (sometimes called rapid maxillary expansion) is a technique used to widen (expand) the upper jaw (palate) when it is narrow.

How does the RPE work?
The upper jaw bone forms in two halves. The RPE moves these two halves apart and holds them there while new bone fills in the "gap" under the gum. As the RPE widens the upper jaw, a temporary gap often appears between the two front teeth which usually closes spontaneously within 3 months.

In which cases is it being used?

How to activate the appliance?
A specially designed key will be provided to activate the expansion screw. It usually needs to be turned twice a day or as instructed by your orthodontist.
Usually, it is activated 0.5 mm/day (2/4 of a turn per day, one activation in the morning, and another in the night). Note: 1/4 of a turn = 0.25mm.

How long should the RPE be worn?
The RPE appliance needs to be worn all the time usually for about 3-6 months. During the first 2-3 weeks, it's being adjusted to widen the upper jaw bone. In the remaining months, it is being left to allow new bone to fill in the gap under the gum between the two halves of the upper jaw.